I know I know, I’ve been slack as always; I’ve been swept off Planet Blog by hen’s do’s, Birthdays, weddings, gigs and rebuilding our destroyed kitchen. Luckily I’m home for at least two months now and only one big occasion a week instead of the 5 I had over the Jubilee weekend (including my own Birthday – grand old ago of 28 now!)


I’ve set myself a challenge; I’ve 14,000 readers in 22 months. I have 7 weeks until this blog is 2 years old! Can’t you believe it? Me neither? Queue re-reading, re-living and no doubt cringing as I look back on some of my rants and ramblings! So to help me get my butt back in gear I want to reach for 16,500 reads by 09/08/12, which means I’ll be writing a lot more so if you’re already sick of me unsubscribe/unfollow/block me now!

Our last day in Spain was warm but with gail force winds (we later spoke to regulars who hadn’t experienced winds like that in 25 years worth of visits) but we braved the flying debris and the sand in our eyes to take a bus to Cambrills - Costa Dorada’s culinary capital according to Trip Advisor and one of our reps said it boasted the small Spanish village charm with white washed houses and a bustling harbour.

Could we find any of that charm? Could we heck! There were only a dozen authentic Spanish villia’s and they weren’t even white and the bustling harbour was dead – probably because of the winds so we'll forgive that one but the town was dead, dead boring. I’m sure there are exquisitely beautiful parts of Cambrills but the kids were getting tired of our fruitless search and the rest of us bar Mum were hungover lol!

We headed back to the hotel and feasted on yet more sea food, anti pasti and fresh locally group fruit and veg – I was definitely going to miss the hotel restaurant!! 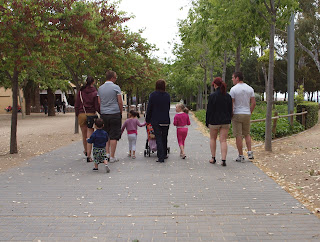 We had early nights all round; the coach collecting us to go to the airport was arriving at 6am. When we awoke the winds were still high and incredibly mighty, I did wonder if we’d be able to take off!!

After a slightly bumpy ride home we arrived just in time for the 4 glorious days of British Summer, I do love going away but coming home to pasty white or lobster red fellow English (wo)men makes me happy!