Today, I chat about my New Years Resolutions, would love to know what yours are?

Sometimes Christmas feels like a full-time job and when you're medically declared unfit for work, you understand why you've been labelled that way.

As I have mentioned countless times I adore Christmas, the music, the food, the decorations, the gatherings, time with all my loved ones, the games and the TV Christmas specials (Hello! Call the Midwife!) but it's tiring!

This week has been utterly mental, I am meeting people for all three meals of the day - Slimming World hell - but only a 1lb gain this December....so far!. There is a mental list running through my head 24/7 and the ridiculous thing is; my Father in law will be cooking Christmas day dinner, due to lack of funds, we've only bought gifts for our 4 Nieces and 2 Nephews and all the meet and greets I've been going to, have been away from our house (i.e no clean up for me!) and yet I'm still panicking and exhausted. (I'm aware of my first world problem!) 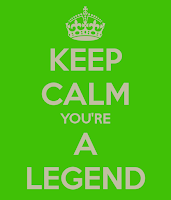 So this blog is dedicated to all the parents buying for all their kids, families, kids friends, teachers, scout and brownie leaders, bosses, workmates, Secret Santa's and Neighbours. To all the shop's co-ordinating mountains of Christmas gifts, irate customers and fatigued staff. To all the charities struggling to provide for all those in their service with a dire lack of funds - I salute you all in this beautifully insane festive period, keep going, there are only a few days left and lets face it, we'll all miss it when there are 365 days to go until the next Christmas day.

If you didn't see it last week here is last weeks vlog (If you can't see the video, click here!)

It's Wednesday! It's also vlog week... so here's a video about cheering yourself up when the festive cheer is avoiding you!

Giving as good as we're given!

It's December, which means I can actually talk about Christmas without being told off on Twitter!

Any long term readers will know; I'm a Christmas-acholic - it's my favourite time of year, in fact, one year, I had to wake up my small Nieces and Nephews on Christmas morning as they weren't up early up enough for my liking!


To me, it's not just about family time, Christmas music on loop (much to Mike's dismay!), and endless supplies of mince pies and eggnog - to me Christmas is a special time of year, where people become charitable and giving, almost selfless. Yes, we should be caring all year around, but I'm just glad that most do their bit for one month of the year.

Since buying our new house, Mike hasn't really worked (due to the oil industry crashing - he is anything but lazy!) so money has been tight, tighter than ever in the 10 years we've been together - it's been hard but we've been sensible and finally my love of coupons and creative cooking has been utilised!

In the past, I've been called a charity whore, I love a good fundraiser, I always religiously watch Children in need and Red Nose day. Mike has to brace himself on both event days as our bank accounts get a beating, usually with each emotive VT they show. But this year, Mike asked if I would forgo my usual sob fest and not donate to charity this Christmas or at least tone it down - and although I was horrified, I knew he was right, but it still made me sad.

After my sulk, I did begin to wonder, how much have I given to charity over the years? It's probably best there is no tally, as I probably could have bought a new car by now, so maybe a year off isn't so selfish, but then there was a knock at the door.

My friend Chole turned up with a suitcase, not going into too much detail, she needed a bit of company and TLC and she's still with us 4 days later and although our bigger house has given us a bigger mortgage (read: Money worries) it's also given us the space to take in those in need - my own sneaky way of still giving even when things are tight and tough - screw you oil industry!


Thankfully our friends have shared his work and got us more commissions so that we're not desperate, some may see that as sympathetic charity from those who feel sorry for us - I see it as all the kindness I've given, over the years, coming back to help us and I couldn't be more grateful to our loved ones.

So after my shock and horror at a lean Christmas, I'm still giving and receiving so much more than a box of chocolates or Boots gift set - doesn't that make you warm and gooey inside? It does for me!

Until next Wednesday!
L x