The second day of our Rome visit, was the day I was most excited about (apart from the wedding!!). To come to Rome was a lifelong dream after being obsessed with the Roman Empire as a child, but visiting the ruins and the Colosseum was a real bucket list moment for me.

We arrived at the Colosseum for opening time and there was already about 150 tourists in front of us. Not wanting to just assume we'd be able to queue jump because of my wheelchair, we joined the line, only to be ushered to the front where the ticket office issued us with two free two day passes to the Colosseum, Forum and Palatine.

Walking through the corridors out into the main arena I had Goosebumps, I always knew the place was huge but until you're inside you cannot fully appreciate the magnitude of the building. Knowing its history and the "games" that commenced there, I can't begin to imagine the terror of the competitors made up of slaves and petty criminals.

Despite its bloody past, the Colosseum was beautiful in its crumbling state and I was overwhelmed by being there finally to witness this magnificent place for myself.

We decided to peruse the onsite museum, which held some beautiful art works from Rome and Pompeii (another bucket list designation for another time) and being a complete tourist I bought a beautiful book on Ancient Rome.

It's was a blistering hot day, well into the 30's and at almost 70% humidity, but Mike braved the heat and the Seven Roman hills to take me into the Palatine Hill ruins. After about 20 minutes, Mike was exhausted and apologising that we'd have to go, although I was sad to have to leave, it was not worth Mikes health, but at that moment, an electric golf buggy turned up beside us. Two of the onsite staff had spotted our struggle and offered us a ride to the top of the hill to see the Palatine to its fullest. I was so chuffed, Mike was grateful and relieved!

The Palatine was amazing, especially the stadium and gardens within, with arches, three story homes and business buildings, all built with such precision and skill,  I don't think we can truly appreciate the genius of the Romans, the same goes for the Forum; the man power needed to erect and stabilise such huge monuments and buildings is mind blowing!

At about 3pm, as we were leaving the site, a thunderstorm started with a lightning bolt striking near the Colosseum, so we hot footed it back to our hotel and within seconds the heavens opened for a couple of hours - thankfully lifting some of the humidity.

For dinner we went to a place called La Matriciana which was established in 1870 and we had the most scrumptious meal of the whole trip; fresh baked breads, tasty cured meats cut at our tableside, the freshest Mozzerella, the best Ragu I've ever eaten and the most mouth watering desserts, all washed down with Martini cocktails and local beers - a delightful end to our time in Rome - next stop Tuscany! 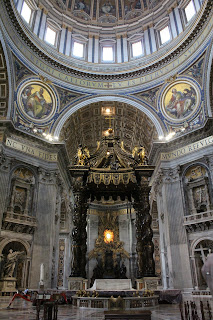