Our first weekend in New York started with a walk towards the Hudson River so that Mike could see The Intrepid, a war ship and museum. On the way we stopped at what looked like a nice All American diner called Balilo on 11th Ave and West 56th  for breakfast - turned out to be a grotty little place with rude staff and bad food - these guys did not get a tip!

On 12th and West 46th Street is the mighty Intrepid Sea, Space and Air museum. It is humongous, imposing and yet majestic. There is a historical audio tour, interactive exhibitions, a space museum on the top deck and an impressive collection of jet’s, planes and helicopters - Mike was in his element!

﻿
The top deck and main museum floors are accessible but of course there are many sections you cannot get to in a wheelchair, Mike said that in some parts he; 6ft and strong built, had problems getting and around the ship. Despite its vast size I couldn’t fathom how 3,000 men during in World War II lived together on the Intrepid, also known as the floating city.
﻿﻿﻿﻿﻿﻿﻿﻿﻿
Unfortunately we didn’t have time for Mike to go into the Submarine floating next to the ship - luckily he has been on many a ship, plane and submarine so he wasn’t too bothered.

As part of our New York City Pass we were entitled to a 3hr boat tour around the entire Manhattan Island with Circleline. As I’ve mentioned I’m a History geek so a tour guided cruise around the city I was falling in love with, was, for me, exciting! 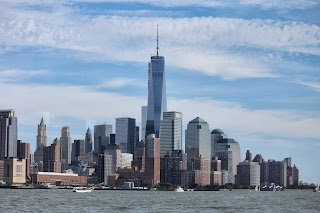 Our camera’s got a good work out but about 90 minutes into the tour a lot of the people, also on the cruise, became restless and bored, drowning out the captains historical facts, jokes and local knowledge - I was a little disappointed but the cruise was still a lot fun, we had nachos and beers, sat back and enjoyed the stunning views. 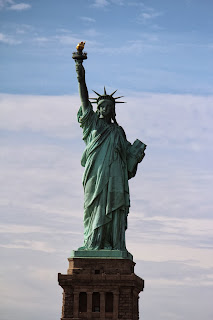 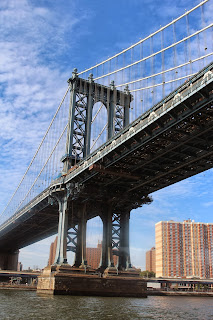 Day 4 Had been nicknamed “The Boy day” - boats, beer, planes, so what would finish the ultimate boy’s day?..... Steak of course! We had made reservations to go to the Westside Steak house. A twenty table restaurant, Westside was a small, dark, yet cosy place with lovely staff and an impressively stocked bar.

We’re in New York...we thought, we’re on holiday... we surmised, so let’s go for the best... we agreed, so, we decided on the Porterhouse for Two (The King of Steak!) and I have forever ruined my love of steak! As the back end of a whole cow arrived to our table, smothered in blue cheese and coupled with grilled asparagus, garlic mash and creamed spinach - I.was.in.Heaven! Dark brown yet a perfect medium cooked middle I will never look at steak on a menu ever again. If you get the chance try Westside - you will not be disappointed! 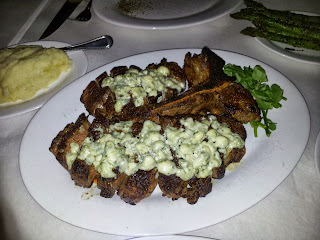 The cause of my meat coma
﻿

Feeling fat and satisfied we headed back to the hotel to chill when I actually passed out fully clothed in a steak fuelled coma - “The Boy Day” ruled.