Monday in Spain was 28 degree’s; my tan was coming along nicely! My camera had taken 200 snaps in three days (and one of those I was on a plane!) but it was to get a huge working out on Tuesday when we all caught the bus in to Malaga’s main town and shopping district.

We didn’t really know what we were planning on doing, but we soon found the Malaga Cathedral, a magnificent sight it was too! Completed in the year 1588, I’m always dumbfounded that these intricate yet huge structures were built by hands rather than machine. As I’ve mentioned before I’m not religious in the slightest, but churches and cathedrals are so beautiful and peaceful you can’t help feel a little jealous of those who get to spend time there on a regular basis.

We moved on through the town of Malaga, and stumbled upon the Picasso museum, I’m kicking myself for not going in, but the outside alone was intriguing! Next to the museum was the Gibralfaro Castle and Fortress.
We decided to walk to the fortress overlooking the city. If Mike thought that Cardiac Hill was bad, he was in for a treat. The route up to the fortress looked fairly close but after an hour up hill to the top, pushing my voluptuous bottom, I expect he was praying for me to go on a diet after all!

Once we’d got to the top, the views were beautiful, the sea one side and mountains the other, even the most modest camera was able to capture a wonderful sight. We had decided to forgo the Castle for the fortress as we thought there might be less steps... we were wrong!  So I popped a few pain killers so that I could take the bumpy roads (The cobbled streets in a wheelchair kills your back!) and take a few steps to see the views. I paid for this day trip dearly in pain levels but how could I not have made the most of this beautiful place! 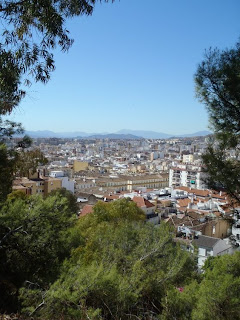 Mike’s Mum is a big fan of the open top bus tours, their family have done these tours all over the world so it was a given that we would join in, here in Malaga too! Not before we stopped at a restaurant called Lepanto for pizza’s and San Miguel beers (well I had to have a break from the Sangria!)
Wednesday was the Hispanic day bank holiday in Spain and unlike in the UK everything closes, luckily all of the hotels shops and resources were still open so we cooked for ourselves, feasting on cured meats, pasta dishes, cheeses, breads and salads and due to the position of our rooms we could hear the live entertainment perfectly from our balcony’s! This particular night we enjoyed a Saxophonist whilst watching the sunset – lovely!
L x
Posted by Unknown at 15:17:00