If you missed the first few blogs to this series please use the links just below!

Unlike our two previous trips to Brisbane, we had a feeling this trip wouldn’t be as jam packed this time.  We’d exhausted a lot of the city’s main attractions. As you read the coming blogs you’ll notice we were almost living there rather than being tourists. We now have a few lovely friends in Brisbane and some family, so we wanted to use our time to generally relax and catch up with people.

On day three we had a late start and breakfast, and then we “forced” ourselves to lounge by the pool in the 29 degree heat! I could have stayed there all day but Mike gets bored after an hour so, we hoped into the pool for a couple of hours. It felt like our private pool as we were the only people there for 3 hours!

After our hard morning by the pool we went back to our room for a hard earned nap lol!

Ironically, we had come all the way to Brisbane and were looking forward to seeing more of our friends Jen and Brian, only to find out they were flying to the UK on the evening of day three! We caught up with them for dinner just before they caught their flights!

We all headed to the iconic Breakfast Creek Hotel, known for its amazing steaks....and steaks we had! They were perfect, medium, juicy and very generous! 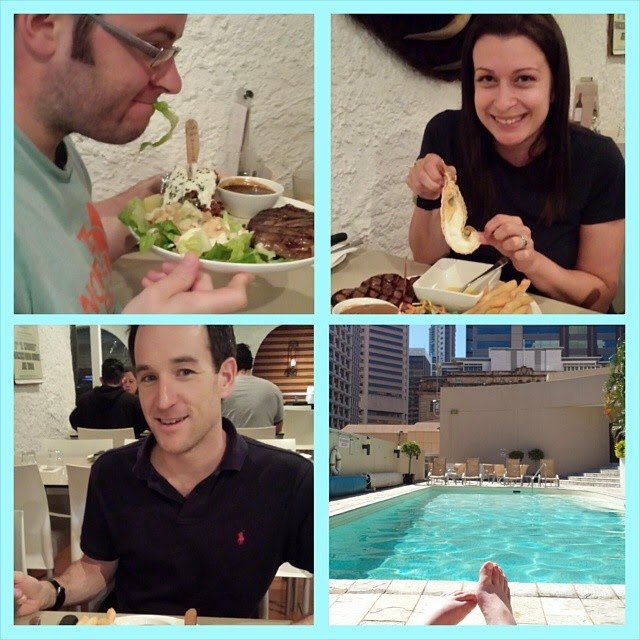 We were sad that we wouldn’t be seeing Jen and Brian more during our trip but thank Heavens for Facebook! (And Hashtags! ;)

Day four was my turn to be sickly! I woke up with terrible nausea, but did my best to ignore it.

As we had exhausted the first two pages of trip advisor, we went to page three to find the more random exhibits Brisbane had to offer.

We decided on going to the Town Hall where the Brisbane museum is. There, we found the full history of the town from its Aboriginal beginnings, to the Brisbane World Expo in 1988 all the way to today.

Mike had a great moment when he recognised one of Brisbane Citys original free settlers as someone who may be a distant relative through his roots in Scotland – small, small world we live in!

As I was feeling better by lunch, we went to the Shingle Inn, Brisbanes oldest cafe’, also situated in Brisbanes town hall. With dark wooden clad walls and waitresses in traditional tea house black and white uniforms, Shingles is a charming little gem that many of the city’s own residents had no idea it was even there!

As much as I’d like to fib and tell you that the Shingles signature coffee and a couple of macaroons was the cure, it was not the best idea for my delicate tummy and the nausea returned. So we went back to the hotel.

Whilst Mike worked, I continued our sloth themed holiday alive by having an afternoon nap.

I woke up feeling loads better. We’d arranged to meet our South African Friends Pieter and Renee for drinks and dinner. We met them at a very busy bar on the river front forgetting it was the beginning of a long weekend, so every office worker within a mile radius seemed joined us in a glass of wine (lemonade in my case!).

We all headed back into the centre of town for dinner and decided on a restaurant called Vipiano. Much like Nando’s does, Vipiano is a great place for meeting friends as each diner receives a customer card to which they add their food and drinks to so that there isn’t that awkward bill splitting at the end.

I chose pizza and a cocktail, feeling sure that I felt 100%, and whilst the boys talked work and studies Renee and I gossiped over cocktails.

About 15 minutes into dinner the dreaded nausea came back, stopping me in my tracks. I donated my incredibly delicious apple and cinnamon cocktail and asked the staff to box up my pizza. Despite this, I thought I’d just needed to avoid all food and drink and  just carry on.

By the time we’d made it back to our hotel it was clear I wasn’t well at all. As we got to our floor I told Mike to quickly push me back to our room..... TOO LATE! I’d thrown up all over myself twice in the 100 metre walk!

So, the night ended with me showering in my clothes, taking anti sickness pills and going straight to bed – how does the boy resist me?
L x