After the long day at Paradise Wildlife park, I had to rest for three days, as my body was spent - agony does not describe the pain, but on the 4th day we had a trip back to London!

18 Months ago, Mike and I bought tickets to see the band Maroon 5 at the O2. We were meant to see them last June but they'd postponed the gig for 6 months - lazy so and so's!

We got to the O2 a few hours before the doors opened, so we could go for our usual pre gig dinner at one of the venue's many restaurants.

We chose Las Iguana as neither of us had tried them before. Sadly we were a tad disappointed;  the staff were rather rude and dismissive. On gig nights the restaurant does half price cocktails - which were lovely, but the food was flavourless and only lukewarm, in fact as I write this, I can't even remember what we had!

As I am an O2 mobile customer we were given access to the O2 V.I.P cocktail bar. I had two very strong Mojito cocktails - which made up for the lack of food in my belly.

Happy and a tad tipsy, we made our way to the disabled seating section, which is basically a wide platform with ramps just to the left of the main stage. I do see our great seats as a bonus to our disabilities - there has to be a silver lining to everything! There are few bonus' to being ill but front row tickets is a big perk!

I'm always astounded by the size of the o2, every time I go, I cannot believe I'm joined by 20,000 people. Those at the back, look like ants from the front. I'm not sure I'd would bother going just to see the big screens, I love to perv  actually see the acts in the flesh.

Supporting Maroon 5 was a guy called PJ Morton a singer/song writer from New Orleans, who is also currently standing in as Maroon 5's keyboard player too. Being a little tispy and excited, I spent most of his set watching other people filing in, holding their "We Love You" signs.

The main support act was Robin Thicke, yes, he of 'Blurred Lines'. I know there is a large consensus of people that feel the song was inappropriate and an advocate of sexual assault, but I can't imagine Mr Thicke or his band/family/record label would have release the song otherwise. I do believe it was meant to be tongue in cheek and a fun record.

Anyway, Robin Thicke was brilliant and an effortless performer, who really got the crowd going and what got the biggest applaud? Blurred Lines, of course!

When Maroon 5 came out the crowd erupted into a frenzy of cheers, feet stomping and whoops. Of course I love my Mike, but lead singer Adam Levine is so bloody HOT!... 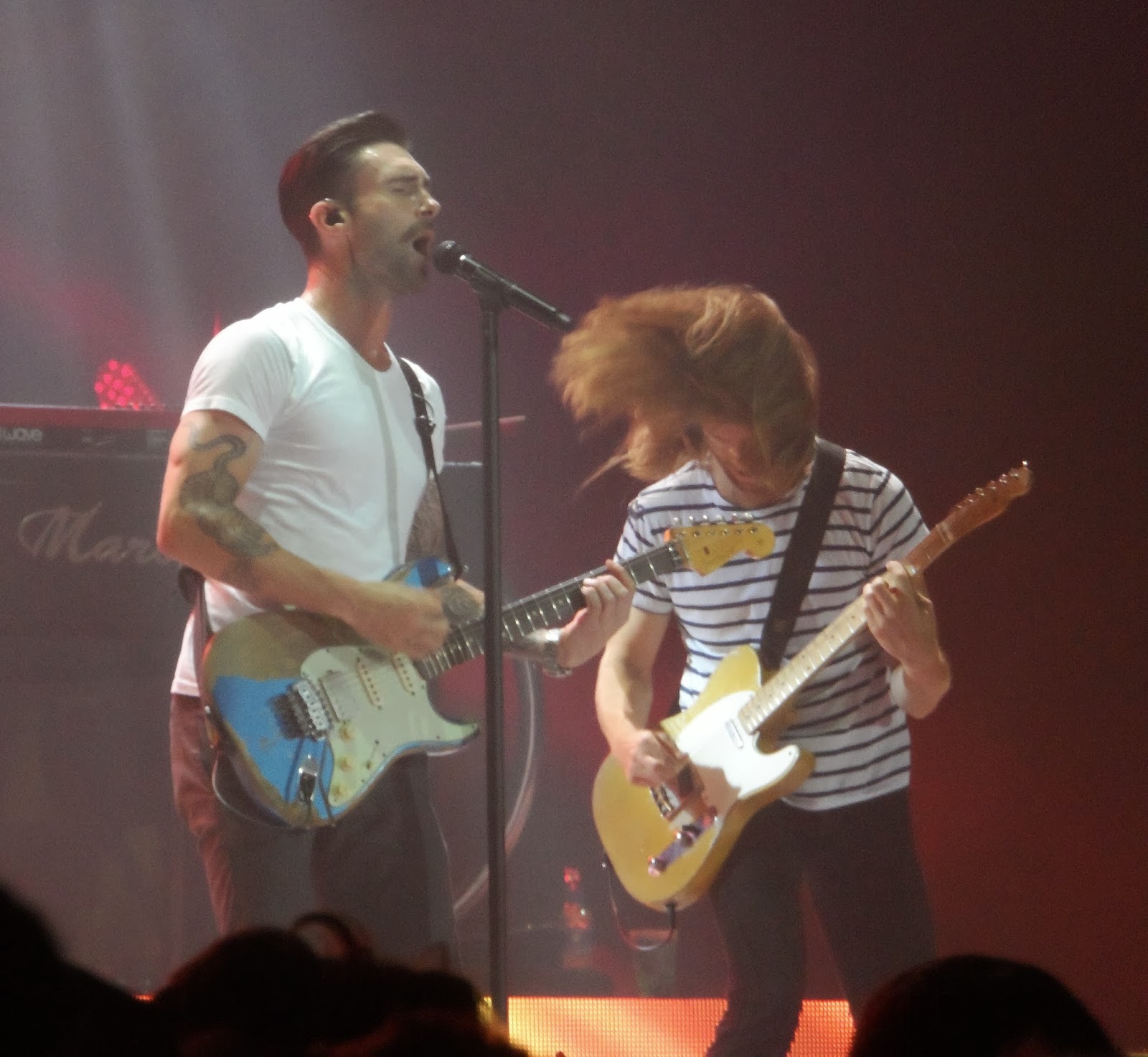 The band were fantastic, playing from their entire back catalogue, including hit's such as; "She will be loved", "Makes me wonder", "Payphone" plus an incredible rendition of "Moves like Jagger". Mr Levine played on his sex symbol status, wooing the ladies with a sexy little hip wiggle and an empty promise of taking his top off, all whilst being the envy of all men present!

By 11:30pm our voices hoarse from singing and the show was over in a confetti canon conclusion.
Despite not getting to bed until 1am, the next day was our friend Mikes surprise 30th Birthday party.

We had made a photo montage comprising of Mike's "best" moments.... i.e. naked baby pictures and drunken wipe out photos!

We'd seen Mike and Lauren for dinner earlier in the week and how Mike had no idea what we were all up to, I don't know. Both Lauren and I mentioned the party a dozen times, I can only conclude Mike hears white noise when Lauren and I waffle on!

The surprise party was a complete hit, and my Mike and I were the last ones standing, (or sitting in my case) along with Mike, Lauren and our friends Sarah and Mark - boom!

It was noon on Sunday before I surfaced, although I was void of any hangover, my body hated me. My feet were curled in spasms, purple, frozen and the rest of me didn't fare much better, but I was on a mission.

My last task of the week was to bake chocolate Muffins, as our friends Steve and Sarah were visiting for tea and cake that afternoon. I bore everyone with the Steve and Sarah tale.... so why should my readers miss out?

I've known Steve for 10 years, I used to go clubbing or to the pub with him and all his boys, summers were filled with BBQ's, bars and swimming in the Thames.

These days the boy's have grown up got wives and have or almost have children. When my youngest sister turned 18, she, our brothers and I all invited our various friends for a big night out. I invited Steve and my brother Steven invited his school friend Sarah.

A few days later they had been on a date and Steve had sent Sarah a huge bouquet of flowers. Fast forward 6 years, they've married and in two months their little boy James will be born. Although this union was a complete fluke, in my mind, I'm cupid!