If you've missed any of the previous New York Blogs, please click the links below :)

Monday Morning in New York was gorgeous; hitting 29c (84F.) We caught a water taxi from Pier 84 in Midtown which took us all the way to the business district where, of course, the Twin Towers once stood.

Whilst we were on the taxi boat passing Lady Liberty we spotted a Mini (as in the car!) cruising down the Hudson, a fellow passenger who has lived in New York for 15 years hadn’t seen anything quite like it.

As we docked by Battery Park there was an announcement that a guy called Rob was offering a walking tour called Footsteps to Freedom, which was, yet again, included in the New York City Pass. We joined the tour and Rob was a fantastic guide - humours, happy and friendly, you could tell he was passionate about history and the city it’s self.

We went all through the financial district including Wall Street, the customs building, the Wall Street Bull & Trinity Church. My favourite part was St. Pauls Chapel, also known as the miracle church. Situated a few metres from the World Trade Centre site, when all the surrounding buildings were damaged and had all their windows blown on 9/11, St. Paul’s was completely untouched with all its original windows intact.

St. Pauls became a hub and refuge for all the rescue workers during the after math of 9/11. Firemen would sleep here, volunteers would cook and look after them and all the tributes and messages of support and love would be posted at St Pauls - I’m not a fan of religion (and the subsequent wars that go with it) but the work of the staff and volunteers was incredible.

From St. Pauls we headed to the World Trade Centre to see the tribute centre and the memorial pools. The pools are the biggest man made water features in North America, each an acre in size. I have to admit I was very nervous about being there, I am so emotional at the best of times and what made it worse was that, with only two day’s until the 12th anniversary of the tragedy, there were relatives and friends laying flowers and flags as tributes to the fallen. After about 20 minutes I asked Mike if we could leave without seeing the Tribute Centre - I don’t think I could have handled seeing that.


Feeling a bit delicate we went back for a walk around Battery Park and found somewhere to get a hotdog for lunch, then made our way to Pier 17 where there is a shopping complex and a few restaurants and cocktails bars.

On Pier 17 almost all of the stores are private businesses so there were lots of unusual clothing, art and gift shops, including a year round Christmas store! Mike bought me an unusual new handbag featuring New York land marks, it sounds tacky but it is certainly not!

After shopping we headed to The Sea Port bar and had incredibly strong mojito’s! By half way through the trip my pain levels were starting to increase so the cheeky cocktails became soothing and medicinal, as well as damn right delicious!

Next we bought tickets to a 90 minutes sail on a Clipper City boat. The boat was 158ft long with masts and rigging 120ft high, it was a gorgeous old looking thing and unlike the jam packed boat trip earlier in the week there were only about 20 other passengers. I was in my element, seeing the sights, sipping on peach sangria cocktails and soaking up the glorious sunshine.

To board the boat you have to use a very steep ramp, I was quite nervous of Mike being able to control the wheelchair so I opted to walk on. The staff were fantastic and I had three of the crew holding me up whist and slowly walked the plank.

Mike was testing out every setting on his beloved SLR camera and just bought me cocktails throughout the trip (probably to keep me quiet), the trouble was when we had docked at the end I stood up and was very very very wobbly - although my pain levels were dampened my limbs took a life of their own!

After finally making my way off the boat (with a lot of help!) we went for a walk through Chinatown which was possibly one of the most uncomfortable times in my life!

I love visiting Chinatown in London, colourful, enticing and unique, but Chinatown in New York was intense. For one thing it’s a huge area which is slowly dominating and swallowing up Little Italy.  Initially I was overwhelmed by the hustle and bustle of it all. There were odd buckets of lord knows what on the pavements, fruits I’d never seen or heard of and there was an abundance of restaurants and Chinese “deli” shops. I was intrigued by the whole area but then begun to notice that people were staring at me quite intently, at first I thought it was because we were the only non Chinese people present at that moment but I soon realised they were curious of the wheelchair.

Intrigue soon became absolute fascination and groups of people were stopping to have a look, bending down to get look at my deformed “croissant” foot. As we moved further into the area I began to feel very uncomfortable and almost trapped, I asked Mike as to whether he was feeling and seeing what I was, or was I just being paranoid? Mike had noticed and found it all as odd and off putting as I did. It got to the point where we had trouble getting out as people just were not moving out of the way.

Once we had escaped Chinatown and recovered from the oddity of it all we made our way to Katz Diner, a New York institution originally called Iceland brothers when it opened in 1888. Katz is famous in the film industry as the movie When Harry Met Sally was filmed there when Meg Ryan’s character faked that famous orgasm.

Many say that if you’ve not had a meal in Katz you haven’t explored New York! We shared an almighty turkey and pastrami sandwich and a Philadelphia cheese steak, Mike had also asked for two cokes and instead two giant family size tubs of coleslaw landed on our tray, we left with a well stocked doggy bag (feel free to ask for your left over’s to be packed up in most American restaurants).

Despite the meat and carb coma, we had yet again put ourselves in, we were not too far from The Big Gay Ice Cream store. I had originally seen the The Big Gay Ice Cream Truck on TV a couple of years ago but before we had come to the States Mike’s friend Elly (who spent a year in New York as an intern) said that it was a must try their desserts.

So, of course we HAD to go! After waiting in a queue that went out of the front door the walls were covered in Unicorns and rainbows with an unusual menu. I indulged in a salt and caramel cone with vanilla and caramel ice cream and unlike in other places at Big Gay they fill the cone with ice cream, sauces and toppings plus the put a plastic cone dish on each dessert so you never lose any precious goodies!

Katz Diner and Big Gay ice cream are at the bottom tip of the island and our hotel up by Central Park, Mike had a mammoth walk home to burn off all that food, in total he walked 11 miles! He slept well that night!

P.S The Photo below is the light beams put up to be a tribute to the Twin Towers 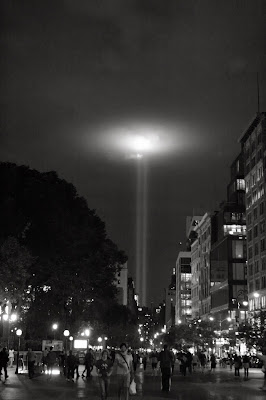