With jetlag lifting we got up early to move hotels our new home: The Manhattan Club a time share hotel - a huge thank you to Mike’s Mum and Dad for letting us use their points to stay there for 7 whole days! Two minutes from the huge Central Park we were in a prime city location.


My New York tip of day is invest in a New York CityPass - you will save a small fortune. Buying a city pass gets you amazing discounts on big tourist attractions and money off in some of the city’s biggest and well known stores. We decided on a 7 day pass and we made the absolute most of all the discounts saving us between $400 and $500!


Using our pass we went to The Bodyworks: Pulseexhibition being held at the Discovery (Channel) exhibition centre on Times Square. Made famous by Anatomist Gunther von Hagens Bodyworks is collection of real human bodies stripped bare and shown artistically through the process of Plastination. It’s weird, although you know you’re looking at real bodies, organs and bones they are so well preserved and clean you forget that they were once alive and you feel that you should be grossed out but it’s a beautiful exhibition.
Next we went to New York’s Madam Tussauds. I’ve never been to the London branch of the wax work museum but we thought we’d hobnob with the likes of Brad (Pitt), Barack (Obama) and 1Direction. Some of the figures are brilliant, so good in fact, I kept looking round wondering who people were for them to suddenly move - they were actually fellow tourists - doh! Despite it not being a national holiday or a school half term it was incredibly busy, I found myself queuing to hold hands with George Clooney! 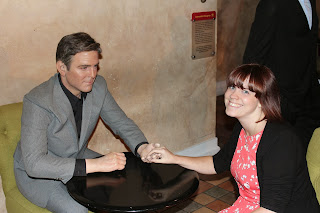 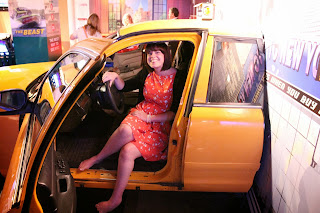 Chillin' in my Yellow Taxi
On the other hand some of them were awful - Julia Roberts looked skeletal and James Dean looked oddly melted!


Because of the success of Marvel comic films there is now a 4D Avengers show at Tussauds where your chair moves, wind blows your hair and water rains over you, I think I jumped more than the small children present. 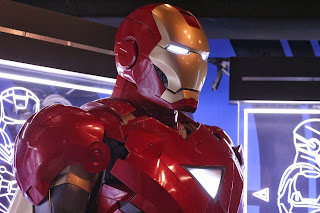 I had a lot of fun at Madam Tussauds and treated myself to a 2 inch Academy Award (closest thing I’ll get to the real thing!) and we headed to Macy’s.


I was sooo disappointed by Macy’s world renowned and featured in countless film’s Macy’s is meant to be a top New York store - it was dirty, expensive, run down and the staff were incredibly rude - I wouldn’t bother going if you’re in town. We left Macy’s and did some clothes shopping instead; Mike bought more than I did!
Dropping off our bags at the hotel we decided in New York we couldn’t leave without seeing a Broadway show. Now I’m happy to see most shows and musicals - I’m a luvvy at heart! Mike on the other hand is not a theatre lover but I thought he’d like Jersey Boy’s. I’d seen the show in London’s West End - great music, comedy and a touch of sauce - it is an amazing show.

We headed for the August Wilson theatre and we were not disappointed! If you get the chance whether it is in London or New York - give it a go! 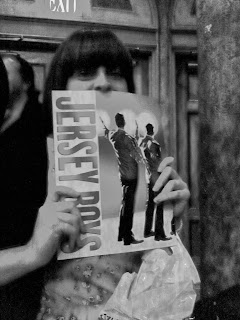 After the show we headed for a midnight dinner at the Hard Rock Cafe. Mike’s loves this chain of restaurants and Mike’s Dad collects their much sort after pin badges.
We both plumped for juicy and giant burgers washed down with strong sweet cocktails - we found in New York barmen don’t measure shots - bonus! Half way through or meal this happened....

(Before I get messages, I’m aware this video is a year old but it’s the same bartender in the same restaurant). Amazing I think you’ll agree!


Another fun filled and busy day in New York - done!