In case you missed Part one of the New York Blogs please click here!

Jetlagged, we were up by 6am and having breakfast in the Hotel’s Gingers Restaurant. Deep red walls, beautiful lighting and huge photos of Fred Astaire and Ginger Rogers all over the place - Gingers was a lovely way to start our day!


We feasted on complementary breakfast pancakes, French toast – which by the way is heavy but very moreish - granola, sausages, bacon, fruit, yogurts, chocolate milk and strong coffee – I had decided that despite my waistline I would not deny myself a thing on this holiday!


We decided that we would start slow and have a wander around Greenwich and Soho with a few stops on the way.


Mike and I are big film fans, we own hundreds of DVD’s, we go to the cinema 4-8 times a month and spend boring moments (think - waiting for a train or bus) playing 6 degree’s of Kevin Bacon and of course New York plays the slick set to many films, TV shows and music videos . We spent a lot of time this trip taking photos and saying things like “Tom Hanks stood here” or “Carrie Bradshaw sat there!” which is why I squealed with delight when we hit Madison Avenue, any guesses why? ....Because that’s where Daryl Hannah’scharacter in Splash! chose her name! – Sad huh? ....Bothered! We loved it!


We stopped to admire one of the most iconic buildings in the city for - the Flat Iron building - smaller than I had thought but majestic and striking never the less.
We visited Washington Square, Madison Square Park and Union Square along the way, camera’s clicking constantly only stopping for a few minutes in each to drink, read guide books and yes you guessed it... take more photos! 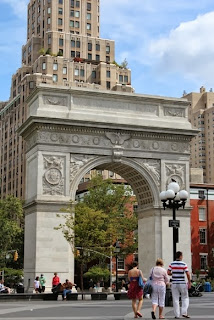 
Greenwich and Soho are these incredibly hip, fashionable and artistic neighbourhoods with boutiques, patisseries’ and designer shops. Mike was not so enamoured with all the fashion but I loved window shopping not allowing myself inside many stores as 1.) They were designers – think Vera Wang and Prada and 2.) The majority shops were inaccessible – but it saved my bank balance and the weather was gorgeous the walk, or journey in my case, warmed up my poorly legs beautifully!


Still so full from out mammoth breakfast we stopped at the Magnoila Bakery for an afternoon cupcake treat and since Carrie and Maranda ate cake’s there, in an episode of Sex and the City – it would have been rude not to! 
After our sugary refuel we headed for the Highline. TheHighline is a length of elevated train tracks that were due for demolition when a trust and committee of New Yorkers saved it and turned it into a city haven. The only way I can describe it is as a long thin Central Park with art, street performers, ice cream stalls, wonderful planted areas next to built in sun loungers and seats - Tip of the day do not start from the middle. Find the end and just keep walking until there is no more track – you’ll be cheating yourself out of a lovely experience otherwise.
﻿ 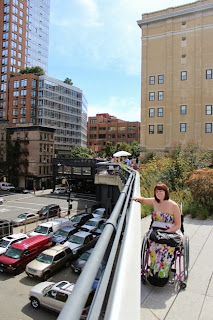 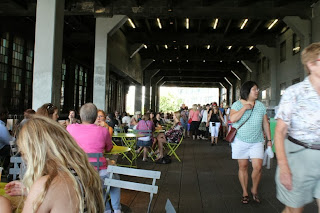 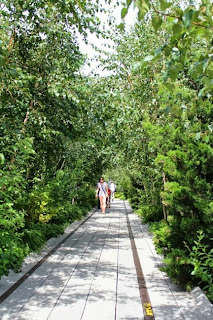 A Glimpse of The Highline
I’m not really a fashion follower, I appreciate quality but I wear what I feel best in and I hadn’t realised that as we arrive in New York the city was preparing for NY fashion week so we spotted many stunning Amazonian girls clutching their portfolios.


Because of our early wake up and full day we were very tired by dinner time but pootled over to Planet Hollywood, I’d never been to one before and Mike was looking forward to a humongous burger of some sort. I made the mistake of plumping for starters and when they came out I vowed no more starters in America because they were huge! I had a massive plate of nachos as did Mike but he also had chilli on top. For my main I had a lasagne rolled meal and Mike the burger he craved, his was lovely mine was awful, so I just ate the other half of my starter instead!


We headed back to the hotel via yet more photos of Time Square – no photos or descriptions can do it any justice, and I was in bed by 10 – passed out like a toddler after playschool!